This post is the first of a series I will try to establish in which I implement algorithms from scratch (hence the name). Obviously all the algorithms I will cover have been implemented before and are likely available as part of some R package with more features, richer output and having passed the test of time. I will not tell you to use my implementations for productive work. This is more a like buying a pre-built computer compared to purchasing the individual components yourself and then building your own computer. The real fun is in implementing it yourself and at the same time you do learn quite a bit about what happens under the hood.

In this post I will go through an implementation of linear regression. If you are a statistician or mathematician this is probably trivial for you, but if you are not, implementing it yourself might really be worthwhile. Of course this is also true for other algorithms, but you have to start somewhere, don’t you?

Our implementation should take in a data frame and a formula and return some results. I am not going to bother with handling factors and implementing a method to predict on new data, as both are not exactly complex for linear regression, but a bit laborious.

However, I implemented the function both in R and C++ with Rcpp. All code is available on my Gitlab.

Let me start by stating that paring of formulae in R is pretty painful and that I am a bit surprised that given the popularity of the formula interface the tools available to extract information from them appear a bit inconvenient.

The following is the code I used, where data is the input data and f the formula passed to the function.

First we look at the parts of the formula to find out what is in there and then create subsets of the input data for the response (ydata) and the predictors (xdata). We try to find interactions in the formula (mainly looking for the : sign in the names of the factors attribute, if you specify an interaction as a * b, this will be automatically expanded to a + b + a:b) and add columns to xdata as needed. This can handle interactions, but won’t properly deal with factors or things like as.numeric(var) as part of the formula.

You can use the terms function to extract information from a formula; it will return the formula and numerous attributes.

While on the one hand this contains everything you need, on the other hand this requires that you have a good idea of what potentially to expect and having a way to handle it all. The above call was relatively simple, but things can be much more complex.

Here we have no intercept and a 3rd order interaction involving two variables that are otherwise not part of the formula. Handling this is not impossible, but a bit tedious. I wish there were nicer tools available to handle formulae out of the box.

For a detailed walk-through with maths I suggest you have a look at the Linear Regression and Least Squares section in Elements of Statistical Learning. This is a great book and you can even download it for free, which is very nice (but consider buying it to support the authors’ work).

Linear regression boils down to the following:

Where you can have as many predictors as you like. Here, predictors would be vectors (this includes columns of data frames and matrices), while the intercept and beta values would be scalars (a single numeric value). The prediction you get out of this is of course also a vector.

Given that we know the predictors we want to use and also have an associated response to train our model the task is to find good values for the beta values. This is what least squares is used for, here you want to minimise the overall distance between the regression line (your predicted response) and the actual data. 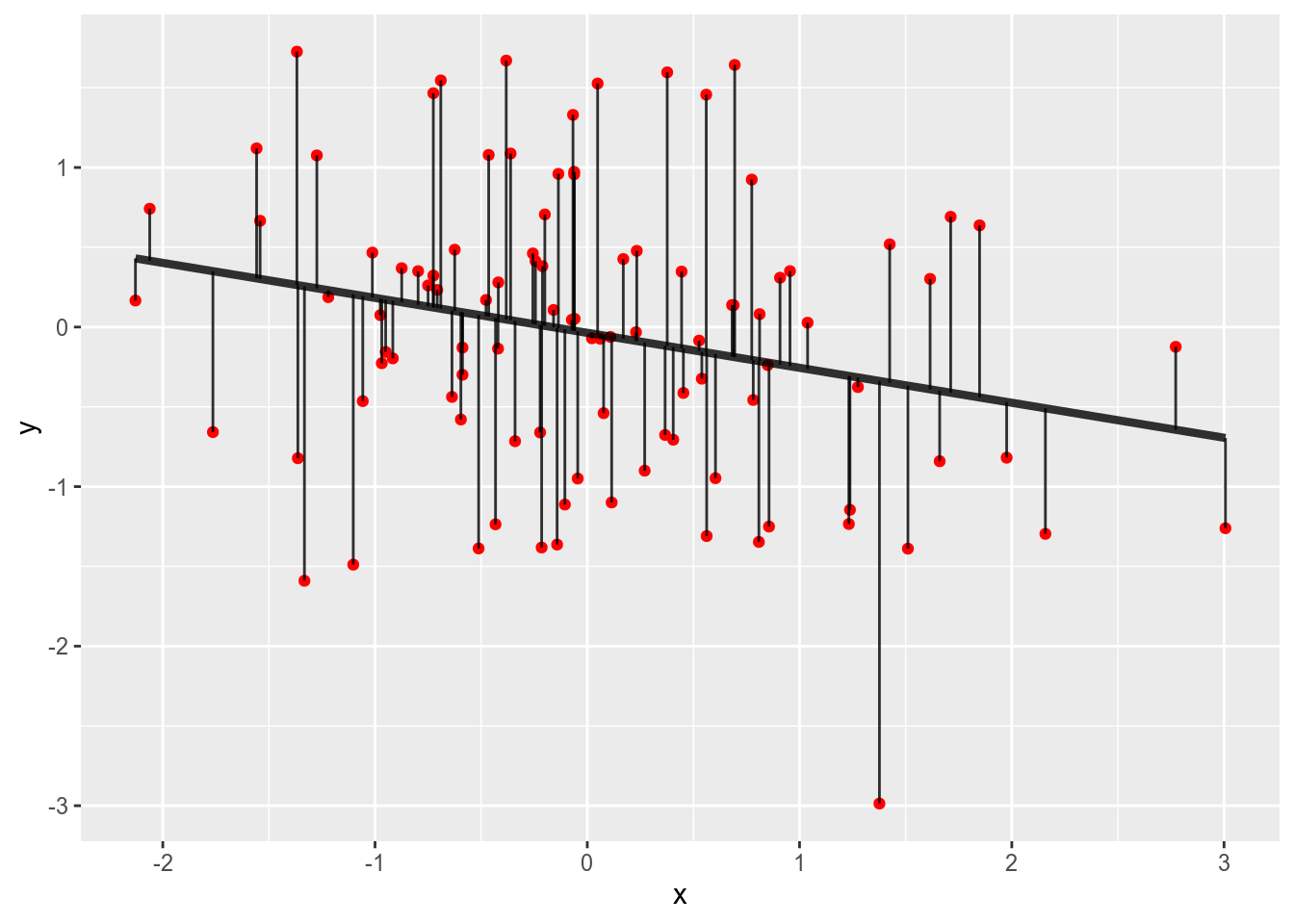 From the equation above one can derive the calculation of the coefficients with ordinary least squares, which is as follows:

The function t gives the transpose of a matrix (rotation, so columns are now rows and vice versa), while solve called on a single matrix will return the matrix inverse. The operator %*% indicates matrix multiplication, if you use a regular * R will perform element-wise multiplication. Matrix inverses are really interesting matrices as multiplying a matrix with its inverse returns the identity matrix (a matrix with all 1 on the diagonal and 0 otherwise).

There are some floating point errors in the above matrix, but generally we see the diagonal being all 1 and the rest being 0.

Now we should get some data, to work further through the calculations.

We use mpg as response, cyl and hp as predictors (ignoring that cyl is not continuous). Let’s extract the data we are interested in and add an intercept (otherwise we would imply that the regression line runs through x = 0, y = 0).

Now, we should be able to put these matrices into our equation from above. We do this in two steps as it turns out that the matrix inverse of t(xdata) %*% xdata is useful for subsequent calculations.

Those are our beta weights. We can check against lm.

The values in the Estimate column are the same as what we have calculated above.

There are more columns in the above table though, which we also might want to calculate while we are implementing our linear regression. The next would be the standard error, which is certainly a useful value as it transports quite a bit of information about how close the data is to our model (on the scale of the data).

This means the standard errors are now available as

Now we have two of the four columns from above. So, next would be t-values. Fortunately we have everything we need to calculate t-values, we just need to put it together the right way.

Finally we just need the p-values. Obviously you should not rely on p-values too much, but they are nonetheless a useful statistic if not abused for binary classification into meaningful and meaningless.

The pt function can only handle directed hypotheses, so you need to double the values for the two sided case. Given that you will likely get both positive and negative values from the previous calculation for t-values the easiest way to get correct results is to work with absolute values.

And after we came here we have now replicated the results table from summary.lm ourselves.

Putting it all together

After we went through all the individual pieces above, we might want to create our own custom linear model function. Here it is:

You probably recognise many of the parts in this function from above. The first part is formula handling, before we calculate the values we are interested in and return some potentially useful information.

The output here looks like we did everything correctly. Compare:

The values in the tables are exactly the same.

For some additional learning experience I also implemented the main parts of the above in C++. As you might know the Rcpp package provides an interface between R and C++ so you can write functions for R using C++. Functions you write in C++ are compiled (to machine code) before you can use them and are much faster compared to computations written purely in R. Thus, if you find yourself having serious requirements for high-performance code you might want to consider choosing this path as it might speed up your programs considerably.

Obviously C++ is a different language than R and getting up to speed might take a while if you have no or only little prior experience with C++. While having written code in many different programming languages before, my experience with C++ was very limited and such I learned quite a bit by also implementing linear regression in C++. I guess the most noteworthy difference when writing C++ compared to R is that the former is statically typed while the latter is dynamically typed. In R a variable is not bound to hold content of only one type, you can first assign a numeric value to a variable and later change it to a string. In C++ however you need to declare the type of a variable and the variable can then only contain data of that type. The approach in R gives more flexibility, but you need to be more careful when handling variables; while the approach in C++ is more rigid, but you can be sure what to expect.

Above, I stated that formula handling in R is more on the painful side of things. This is still true in my opinion, but I suppose handling formulae in C++ would be even worse, so while implementing linear regression in C++ I did handle the formula in R.

So, you can access the wrapper code here, which calls the core part as build in C++ (click this link for the code).

Before being able to use the function you need to compile it and to be able to compile it you need to set up the integration of C++ in R and also have a compiler installed. The usethis package can help you quite a bit with the whole set up and I suggest to have a look at its functions if you want to use C++ in your own packages.

The results here are the same as with both other functions, suggesting that the implementation shown here is correct. Compare the results from our pure R implementation:

In this post we went through the inner workings of linear regression and build an implementation ourselves. Fortunately we got the same results as when calling lm.

We have seen that the core of the method is the calculation solve(t(xdata) %*% as.matrix(xdata)), which turns out to contain smaller values when the variance in the variables is greater, thus if there is a lot of variance in your data the coefficients will be smaller and the model fit worse.

Also, if you have ever seen error messages about a singular matrix when building a linear model, then the matrix inverse could not be computed (because there are linear dependencies in you data).

Finally, it has been an interesting and rewarding experience to build all this myself. Having the functions return the correct values for the first time (especially in case of the C++ function) was pretty neat and walking through the details of the method and the maths involved strengthened my understanding of it. As mentioned above, I am not the first person to build a function to fit a linear regression, but probably the end result was less relevant here than the path that lead to it.